Max- Max is a full blown toddler and does full blown toddler things like refusing all foods that aren't pizza and getting super excited about the firetrucks that fly down our street, sirens blazing.  He loves trains, taking selfies with my iPhone and the Chicago Blackhawks.  He hates naps and coloring. While it hasn't been proven by expects, I'm pretty sure he's a genius and I'm hopeful he'll put his parents in a good nursing home one day.


Brett - He's been my partner in crime since we started dating in December of 2005.  We made it official on October 4th, 2008 and every day since has been wonderful- even the bad days. He's hysterically funny, an unapologetic sci-fi nerd, amazing engineer and all around handyman.  He's a perfect husband and an incredible and patient father.  He cooks a perfect steak and I married him so I could steal his chili making secrets. Every day I wake up and wonder what the heck I did to deserve someone so awesome.


Shelby the Cat- Somehow we managed to pick out the meanest cat at the Humane Society.  Her name is Shelby but she thinks her name is "Shelbygoddammit". We keep her around because she kills spiders and once in a blue moon she's really cuddly. Her hobbies include attacking my leg and peeing on my bed even when in litter box is clean. 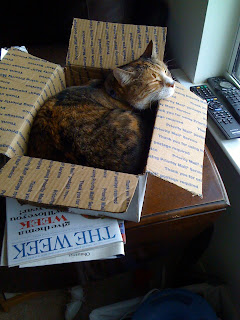