Max had his 4 month appointment yesterday and our doc confirmed our suspicions.  The child is totally awesome. Ok, so maybe Dr. R didn't say that but he did say Max is doing really well.  He's 15 lbs 10 oz and 25 inches.  75% percentile for both height and weight. He's keeping mommy's dreams of having a Chicago Bears Linebacker for a son alive. Too bad he won't inherit any athletic ability from either parent.

He also got 3 shots, which went well.  Some moms say they get more upset than their kid when it's time for shots. Can't say I have that problem.  While I don't enjoy watching Max get stuck, it doesn't tear me apart.  I think I got all needle stick trauma out of my system when at 3 days old, Max was admitted to the hospital.  There, several nurses, most of whom looked barely old enough to drive, stuck him SEVEN times before they called in the seasoned vet to put in an IV. Compared to that, a simple vaccine is pretty much a non issue.

Max didn't seemed bothered by them either.  I put a bottle in his mouth just before the nurse stuck him.

With the first shot,he basically gave the nurse a dirty look and went back to eating.

The second shot he fussed for a second then realized "Hey! Food!".

The third shot, the one with the fattest needle, prompted a brief wail before going back to his bottle.

The boy finds comfort in food.  That's a trait he sure got from his Momma.

The whole appointment was basically a success, except for crazy long wait.  Max dealt with the wait by doing what Brett and I wished we could do: 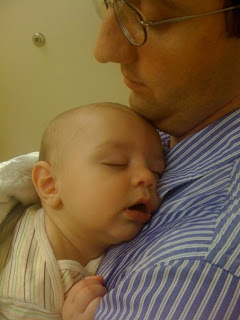 Speaking of sleep, I had to deal with a fussy baby during the afternoon but Max slept like champ at night.  I put him in his crib at 5 PM for what I thought would be 10 minutes while I put away the laundry. Much to my surprise he fell asleep and stayed asleep until 10:30.  No bedtime routine or even bath.  And when he did wake, to eat, he promptly went back to sleep and stayed that way.  We had to wake him up when it was time to get ready for day care.

I need to start scheduling his shots on Fridays so perhaps we can get an extra few hours of shut eye on Saturday morning.

Am I a terrible parent for thinking such things?

Hey, if someone says they would never think of things like that, they're lying!

The six month shots were the worst for me. That's when they start looking at you like, "ummm...really? You're letting them do this to me?"

I had a friend once who got really excited about her baby's shots because she knew he's take an extra long afternoon nap and she would get a ton of blissful time to herself.

I love that Max sucks up the shots like a man. Lucy wails like only a girl would. Too funny!

Oooh, that is a very good tip! Too bad that my boy doesn't need any more shots for another 6 months or so...