Dissecting the Asshats of the Similac Recall

Unless you aren't a parent you've probably heard about the Similac recall announced last night. Since it started, a whole lot of asshattery has been going on.

Obviously, Abbott Labs, makers of Similac are the King Asshat.

First, there's the fact beetles got into their plant. That's the obvious reason to be ticked, so I won't harp on the situation.  What gets my panties in a bunch is that they announced a massive recall without the technical support to back it up.  For hours, the Similac recall website was overloaded.  Thousands of panicked parents, myself included, were frantically trying to make sure they didn't serve their child beetlejuice for dinner. Calling customer support got you nothing but a busy signal. Luckily several parenting message boards (which I generally avoid because my idiot quota is usually filled by people I encounter in real life) offered a place to share known recalled lot numbers. There I learned Max was in fact drinking beetlejuice. 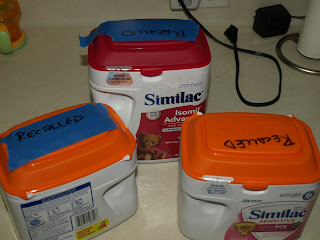 Abbott Labs is an asshat for their complete inability to manage a recall.

Asshat #2 -The "lactavists" who used this recall as an opportunity to bash parents who formula feed.

When perusing Twitter and Facebook after the recall was announced, I felt slapped in the face. There were so many comments on  how "breasts can't get recalled" or "See, by using formula you are feeding your baby poison". Really? I'm panicked that I don't have food for my son when he wakes in the morning and you are going to make me feel worse by telling me I'm a bad mom?  Now is not the time to preach your gospel.

Instead, how about supporting a stressed out mom or just keeping your mouth shut?  Please stop with the asshating. Panicked parents don't need it right now.


On my way to work this morning I stopped by Walgreens to stock up on formula. Still sitting out were rows and rows of recalled stuff.  I mentioned to the manager that most of the formula he had on the shelf was recalled. He looked at me like I was crazy and then said "Huh, I should probably read that email". My husband had the same experience at Rite Aid but with an even more cluessless manager.

As a consumer who is constantly connected to the internet, I knew about the recall. However someone who isn't as wired, works a late shift, or is just busy could have easily missed the news. National drugstore chains have systems in place to get recalled items off the shelf as soon as the news is released. At 7AM the liquid formula at my Walgreens had been well raided. I wasn't the first parent to come in frantically searching for something safe. I can forgive Ma and Pop drug stores. Walgreens doesn't get off so easy.

So to the national stores still selling recalled Similac, please stop with the asshatness.  You should know better.

Unfortunately recalls are going to continue to happen.  From baby food to cars, items will get recalled. I only hope everyone can learned from past mistakes so the asshattery can be kept to a minimun and instead focus all energy on safety.

This post was brought to you by my overwhelming annoyance with the Similac recall and the WoW!
Posted by Laura @ The Things I Said I'd Never Do at 10:03 PM