This is started as a quick post about how I love my new neighborhood and how it's like no place I've ever lived.  It's rapid expanded into a 2 part series about how I'm finally getting to live out a dream.  You can read Part 1 here.

Cincinnati! A metropolitan city!  They have a zoo! They have an opera! They have Chipotle’s on every corner. Most importantly, Cincinnati put us 3.5 hours from one set of grandparents and 4.5 from another. Moving gave Max the opportunity to get to know his grandparents, something I wanted since his birth.  My relationship with my grandparents shaped me and I wanted Max to have the same opportunity.

Brett’s new job wanted him to start immediately and our little suburban house was empty before it even went on the real estate market. Since we had one mortgage already and and we barely knew the Cincinnati area, we weren’t about to jump into buying a new house.  We decided there was no point in putting down any permanent roots.

That’s when it hit me.  We could try something new!

My early twenties dream of a cozy apartment above a coffee shop was no longer possible.  It wasn’t just Brett and I anymore.  We have a toddler and man is he LOUD. It’s like living with a puppy who just downed a can of red bull.  Sharing walls with anyone was out of the question as we generally prefer that people don’t hate our guts. Like hyperactive puppies, toddlers need a place outside to run, so downtown wasn’t really an option anyway.

Max and my nephew. It's like this all the time.

We needed to find a place that was family friendly but urban.  I wanted playgrounds and yards but also accessible public transportation. I wanted to be able to walk to the grocery store yet still be able to find playmates nearby for Max. I dreamed about a neighborhood Farmers Market. Most important, I wanted the ability to walk to an ice cream shop after dinner on a warm summer evening. I really like ice cream.

Mr. Dreamy wasn’t immediately keen on the idea.  A more urban neighborhood required us to give up some of the luxuries we’ve gotten used to, like off street parking, quiet streets and significantly more privacy. His hobbies required much more space than mine and space was something we would need to give up.  However, Mr. Dreamy is dreamy not just for his looks but also because he’s willing to put up and give in to my pestering. Since it was only year, he was game.

The three weeks between the job offer and Mr. Dreamy’s first day were spent frantically researching neighborhoods and hitting refresh on the Craigslist “for rent” page. When we narrowed down to 3-4 neighborhoods, all on the same side of town, Mr. Dreamy took a quick flight to Cincy to check them out.  One stood out.  Oakley. Even the skeptical Mr. Dreamy fell in love.

More website refreshing and cold calling continued but we didn’t have much luck in finding a rental house.  We weren’t the only ones in love with Oakley and being 700 miles away put us at a major disadvantage.  Properties were gone before we could look at them.  As Mr. Dreamy’s first day grew closer, we decided Max and I would spend an extra week in Savannah, a week in a hotel in Cincy to house hunt and finally we would stay with my parents in Chicago until we found a rental. If no place was found by mid-June, we’d give up and start looking to the suburbs, where rental properties were abundant.

During the week we all lived in a downtown hotel the stars aligned and whatever karmic justice was owed paid out.  We found an adorable house in the best part of the neighborhood. It was charming, spacious and most importantly, had central air.  We moved in the first weekend in June.

It’s been less than two months and we’re already checking out the “for sale” signs in the neighborhood.  The convenience of living in walkable neighborhood is astounding. Today the car was at the mechanic.  Despite being without a car, Max and I checked out a pre-school, stopped by a friends house, got a cup of pickmeup juice at Starbucks, picked a up some office supplies and finally got the car from the shop. Yesterday Mr. Dreamy walked to pick up our take out lamb korma and naan for dinner.

The people in our neighborhood seem friendlier too.  In two days of living here, I met more neighbors than I did in four years at my old house. I guess, when you live on top of each other the way you do here, it’s best to make friends quickly to keep them from becoming enemies.

So yeah, I’m aware it’s still the honeymoon phase.  In the winter, the on-street parking will be a hassle and our charming old house will be drafty. Everywhere has their annoyances and we have 10 more months to decide if the city-ish lifestyle is one we want to continue. For now, I’m embracing that I can finally live out one of my dreams. It’s pretty awesome.

Oh, and remember how I said I wanted the ability to walk to an ice cream shop?  I can walk to five!  We went to one tonight. 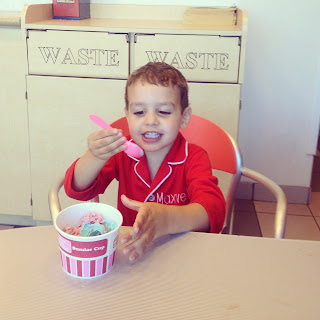 Enjoying a quiet summer Friday morning drinking coffee and catching up on your blog. Charming, inspiring, heartfelt, sincere and so well-written! Thank you for making my morning special.

God, I would love to be able to walk anywhere at all.