This is my series about my experience with the Dr. Oz Three Day Detox Cleanse.  Check here for my post on why I decided to attempt the the cleanse and how I prepped the ingredients beforehand and here for my experience on Day 1.

Lunch Smoothie
I won’t lie.  This smoothie is a doozy. It’s veggie heavy (Kale, cucumber, celery) making a thick, fibrous drink.  Before I started this cleanse I read some reviews from others equally crazy detoxers. The biggest complaint was regarding the lunch smoothie.  By day 3, most people had manipulated the recipe to make it more palatable.  Here’s what I did to make it drinkable. 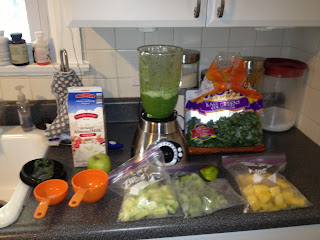 Despite all those tips, my blender still had a tough time processing all the food.  I few times I had to get out a spoon and manually mix to help it along. 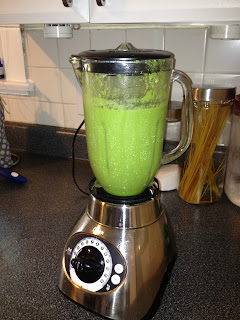 This makes a TON of smoothie.  I had trouble drinking the whole thing and I read some people saved half of it for a snack. Despite the complaints from others, with the tips I mentioned above, I didn’t find the flavor all that bad. With the pineapple and coconut oil it had a tropical feel.   My three year old actually liked it and requested his own small glass!

How I felt on Day 2
Day 2 was a bit better than Day 1, until evening when my detox headache got the best of me.  I did get a decent workout on Day 2 and then spent the afternoon pushing Max around the steep hills of the Cincinnati Zoo in the blazing sun. Despite drinking mass quantities of water, I’m sure that didn’t help.

I managed to avoid all of the tasty zoo treats, even when Max was given a free Icee.  In the heat, that fluorescent blue Icee looked damn delicious.  I did accidently cheat later in the day when without thinking, I popped some Chex Mix into my mouth while making Max a snack.  I did it again when cutting up some broccoli. That was an eye opener.  How many wasteful calories do I consume by mindlessly popping food in my mouth just because it’s in front of me?  It’s a serious concern and I need to get better at being aware.  Has anyone combatted this issue before?  I’d love suggestions on ways to be more mindful.

I still spent the day craving real food.  I had half a breakfast smoothie as a snack (Max drank the other half when I wasn’t paying attention) and it helped the afternoon hunger binge.  Like yesterday, I took my detox bath while my guys ate a proper dinner. Despite being upstairs engulfed in steamy lavender/Epsom salt bliss, the aroma of burgers and roasted broccoli still made it’s way to the bathroom to taunt me. I don’t know if this was part of the detox or not, but I sweated like crazy during the bath.  This didn’t happen the night before.

I sucked down a dinner smoothie around 7:30. By 8:15 I fell asleep on the couch wrapped in Brett’s arms, hoping that by day 3 I would have the amazing energy all the other reviewers experienced

I have a question! How intense of a workout did you do during the cleanse? If it's not good to work out during, I was thinking of doing it next week after my half marathon, during my recovery period.

As for mindless snacking (which is a HUGE problem for me), I try to have gum or Lifesavers Wint-O-Green in my mouth while I'm cooking or packing lunches. It helps.

And I do Epsom salt baths after long runs and I frequently sweat like crazy, like I'm in a sauna. I think it's normal.