I love football.  LOVE IT.  American, first down, tackle, sacks, blitzes football.  The NFL, in particular.  I don’t really get college football, mostly because I went to a tiny, crappy university.

This comes as no surprise to those who know me, especially those annoyed by my constant stream of commentary on my Facebook page. Specifically, I love the Chicago Bears- the team of my hometown.

I hear a lot of people criticize football.  It’s barbaric.  It’s misogynistic. It’s commercialized. The players are all cocky, overpaid bastards. Yes, it’s probably a little of all of those things, but here’s 10 reasons I love it.

9.  It’s Cathartic
I’m a gentle person.  I don’t get into physical fights.  I’ve never clocked someone.  I don’t condone violence of any sort.  However, watching the defense sack a cocky quarterback into next week feels good. It gets out my aggressions without actually hurting anyone.

8. Athletic Men + Tight Pants = Easy Watching
I watch for the athleticism of the sport.  The pants are just an added bonus.

7. Football Food
Football food is primarily appetizers and appetizers are my favorite category of food.  Bite-sized nuggets of something that’s usually cheesy, battered, fried and dipped in some sort of sauce are the quintessential football food.  If the sauce is Buffalo, even better.  I love Buffalo sauce. I have an entirePinterest board devoted to foods that use the stuff!  Attending a football game means tailgating, which is even better. I love eating alfresco, even if it is alfresco in negative temperatures.

6. A valid excuse to drink mid-afternoon on Sundays.
You can’t have bite sized nuggets of cheesy, battered, fried goodness without beer.  It’s just not right. Plus, the alcohol helps numb the pain when your favorite team consistently breaks your heart. The fans of my team might take it a little too far. 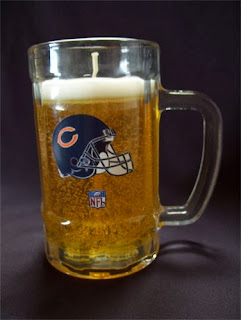 5. Short Seasons
There are only 16 games in the regular season.  One win can send you to the playoffs.  One loss can end your post-season hopes.  Every game counts, unless you’re a Jaguars fan.  For you, all hope is lost.

Oh, and you know why the Super Bowl is such a big deal?  Because it’s one game. No best of 7 here.  No long, drawn out series of games. Just 60 minutes to a championship.

4. Rivalry
I love a good sports rivalry.  In baseball, as a White Sox fan, I enjoy hatin’ on the Cubs.  As fan of the defending Stanley Cup Champions, the Chicago Blackhawks, I find joy in chanting “Detroit Sucks”. But nothing is more fun than being a Bears fan and talking crap about the Green Bay Packers.  It’s an epic rivalry, going back to 1921.  During Bears/Cheesehead games, the shit-talk flies. There’s taunting texts from the family (by marriage, not blood. Important distinction) that support the Packers. There’s hilarious memes.  There’s curse words shouted at the TV.  It’s all I good fun and I live for those moments. 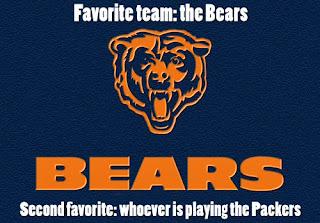 3. Community
Football brings people together.  Since I was 18, I’ve lived away from the Chicago.  However, whenever I wear a Chicago Bears shirt a fellow Bears fans appears.  In Savannah, I had a long conversation about the Bears O-line with stocker at my local grocery store. Just this past Sunday, as my family was walking to the coffee shop, two runners yelled “GO BEARS” as they ran past. When you are wearing the shirt of your favorite team, you can usually make a friend.

2. City Pride
This goes hand in hand with community.  I’ve noticed that with football, more than any other sport, the town rally’s around their team, even if they suck. In 2007, the Bears went to the Super Bowl.  I couldn’t stand to watch it in Savannah, where no one really cared, so I hopped a flight to Chicago.  Even though we lost, I’m so glad I went.  Midway airport was a sea of navy and orange and every last-call boarding announcement ended with “And Go Bears”. Every sign in every business wished the team good luck. Even at mass on Super Bowl Sunday our priest, a life-long Chicagoan, injected every other line of his homily with “Go Bears”.  Despite the loss, the memories of that trip bring a smile to my face when I see the way the city came together.
Maybe it’s just a Chicago thing.  You should see how they rocked it during the Stanley Cup.

1.  It Brings the Family Together
Growing up, my family had season tickets.  Once or twice a year, I got to attend a game with my dad and my Paternal Grandfather and it was always exciting. Most of the time it was freezing but I didn’t mind.  Dad would buy me hot chocolate and teach me the rules of the game. I learned many of my most creative curse words at those games, both from him and the fellow fans. I also went to many games with my maternal Grandfather. He was normally a very laid back man, but the Bears were known to ruffle even his feathers.

While it’s been years since I’ve attended a game, I still discuss Sunday’s game with my Dad later in the week.  Despite me being in Ohio, my sister in Connecticut and my brothers in Chicago, on game day, were all connected, usually by text. We all practice those swears we learned at games with Dad.

My most special memories involve football. It brings people together and forms bonds between those who might have nothing else in common.  It’s rowdy, exciting and heartbreaking. It’s the NFL and I love it.

"Yes, it’s probably a little of all of those things"...hahaha! That made me laugh. I love that you embrace all the great qualities instead of being sucked in to the negative. You've inspired me!