Breastfeeding. It really sucks (bad pun intended) and it’s really, really hard to get going. And no “expert” tells you that.
Everything I read before Max’s birth said that breastfeeding is natural and easy to get started. When the baby is born, just throw them on your chest and eventually he or she will figure it out. When I would hear about people who “couldn’t breastfeed” I thought they just didn’t try hard enough or they were being selfish. Well, those judgments came back and slapped me in the face.
My experience didn’t go as planned. I had 10 different nurses trying to show me how to do it in my first few hours. I had 3 visits from the lactation consultant (LC) while in the hospital. Despite that, when discharged, I still didn’t feel like I could feed my son, even though people kept telling me everything seemed fine.
I should have gone with my gut (another great lesson of motherhood, always go with your gut) because by Max’s 3rd day he was admitted to another hospital for fever, jaundice and dehydration. I couldn’t feed my baby and my insistence to avoid supplementing and nipple confusion landed us a night in the local hospital. My milk took a week to come in and my days were spent doing nothing but nursing, then supplementing then repeating the whole thing over again 30 minutes later. All I did during those days was cry. I felt like a failure that I couldn’t feed my son. I thought long and hard about just switching completely to formula, something during pregnancy I swore I wouldn’t do.
During that time, I found out I was not alone. Friends came out of the woodwork to share their struggles with breastfeeding. No one seemed to have an easy time. Some decided to go to formula while others kept with it. Everyone who contacted me commented on how hard it was and how no book, doctor, class or LC told them that it could be difficult. I am sure many people have had an easy time breastfeeding but no one I know did.
Eventually, when I was about to finally go completely formula, I decided to see an LC one more time. I was worried about being judged for supplementing and for contemplating going formula only. Luckily, that was not the reaction I received. The LC was the first person who told me, if it doesn’t work, it’s ok and I tried my best. Then she helped me work on Max’s latch. When she weighed him pre-feeding and post and I saw that he actually did gain weight and he was eating, every thing changed. When I stopped putting pressure on myself everything clicked. Suddenly Max was feeding like a champ and I didn’t need to supplement. Also, she rolled her eyes at the notion of nipple confusion and I can honestly say that Max goes between a bottle of pumped milk and me without any issue.
It’s still a tricky road as I get over nursing in public (yay for the Hooter Hider) and pumping enough so I can occasionally get away for a few hours without rushing home early to nurse. Plus, Max can’t handle a lot of dairy, my favorite of the food groups. There’s been lots of almond milk, coconut coffee creamer and rice milk ice cream in my life and it just isn’t the same. And soon, I’m going back to work 3 days a week and Max will be in Day Care. I am going to work hard to make sure he can still get breast milk exclusively. If I made it this far, I can keep it up.
However, I will NEVER EVER EVER judge someone who decides to go the formula route. There is so much negativity towards formula feeding moms out there on the interwebs and I’m sad that pre-Max, I was part of that clan. All that matters is that the baby is fed and that he or she has loving parents. If breastfeeding is causing the mother to loose her sanity and resent the baby, is she really doing what’s best for him? 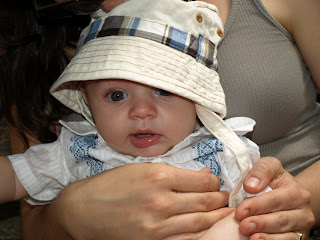 I am so proud of you Laura. You are doing such a great job with Max. He is growing and developing right on track. I was on of those mothers who lost her sanity and threw in the breastfeeding burp rag a little to soon. I know that my breast milk is best for him and that my body is made to support my child, but I just couldn't do it. I support you all the way, and I know it has been a very difficult road for you. I hope things continue to get better.