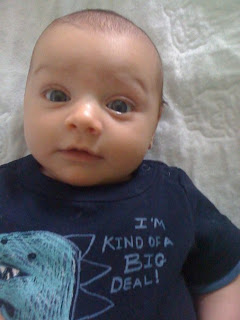 He’s 9 weeks old and he’s changed the world. Well, my world at least.  Before Max arrived I thought I knew everything.  I knew being a parent was going to be hard but I had NO IDEA how hard.
I had it all figured out starting with birth.  I did the studies and I was going to have the drug free, midwife assisted, birth center, water birth without intervention and because I had prepared myself and my body, it was going to be relatively easy. For 9 months, I strutted around the hospital where I worked, proclaiming I was NOT going to have my baby there.
Humility lesson #1 began 18 hours into labor when my saintly midwife decided I needed Pitocin to jumpstart a stalled labor. Pitocin= hospital transfer.  An additional 16 hours later, I was holding a 10lb, 4 oz Max in the hospital where I worked. The hospital I wasn't going to need. And the drug free birth?  While I managed to avoid the epidural, I happily accepted a bit of nubain around hour 20.  You know, to take the edge off.
So that was the beginning of a journey that hasn’t gone the way I expected.  I quickly learned I didn’t know a damn thing and I was not the baby expert I thought I was.  I thought I was prepared because I read all the books, but as my also saintly husband proclaimed by Max’s second day on earth, “Apparently, Max didn’t read the books”.
So here I am, sharing the story as it unfolds.  Mostly so when Max grows up, he has something to show to his therapist.
Posted by Laura @ The Things I Said I'd Never Do at 5:32 PM

LOL! So he has something to show his therapist... you kill me Laura!

Okay, so as I'm reading back, this is all SO familiar! I flunked out of two home births--the first ended up being vaginal in the hospital (with epidural, episiotomy and the whole 9 yards I didn't want) and the second an emergency c-section. Sigh. Good thing the key to both my birth plans was flexibility. And we have happy, healthy babies! I also found myself at like day 10, trying to figure out why my baby would not latch on and would only scream and cry. Breastfeeding was no picnic, and I doubted everything. This second time around, having the confidence to know that I did it once took away all those worries and fears and made it much easier! Glad your LC helped you gain that confidence.