During these violently hot summer days, I see a pregnant woman and think "Thank God I was at my biggest in the winter". I have such sympathy for those woman, Being pregnant when the heat index is 110 requires a mindset I just didn't have during my third trimester.

Then, this afternoon, I got an email from a pregnant friend and it made me realize that being pregnant sucks no matter what the temperature. She was lamenting how one of the worst parts of pregnancy is the ridcuously stupid, inappropriate and sometimes hurtful comments people make.

In her case, at a family party, someone came up to her and said "Congratulations! How much weight have you gained", as if she looked HUGE (she doesn't). The tactless person then proceeded to say "Well you don't look swollen and puffy at all". Bahh!

Seriously? Do people stop thinking when talking to pregnant women? When the poor woman is already feeling like a house and incredibly hormonal, do you really need to say things to make her feel worse?

Some of the more memoral comments I recieved include:

"What do you mean you aren't going to find out baby's gender? How am I supposed to buy you a gift"

"You look like that woman from Jon and Kate plus Eight" (I look like I'm carrying 8 babies? Awesome)

"Wow, your boobs are huge!"

"Don't put your arms over your head. It'll cause a miscarriage"

"Can you still fit in your Mustang?"

I know most people don't mean harm and I worry that maybe once, before I ever thought about pregnancy, unwittingly said something stupid. Now that I've been there I think all pregnant women should be able to smack one stupid person a day without reprocussions. Maybe I'll make that a rule when I'm queen of the world. When Queen, I'll also provide free weekly massages for women in their 3rd trimester. Seriously lifesaving.

I do have to give props to my friend Brian who said the nicest thing ever when I was pregnant. At 38 weeks we met him and his wife for dinner. I hadn't seen them since the pregnancy was first announced. Upon greeting me he said, with pure sincerity, "Wow, you don't look big at all!"

I coulda kissed him!

What stupid things have you heard when pregnant? Or, fess up, what did you say to a pregnant woman that you immediately regretted? 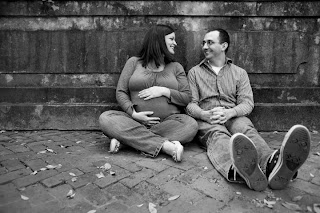 Eight babies in there?  Really?
Posted by Laura @ The Things I Said I'd Never Do at 8:29 PM

Confessions of a Paper-Crafts Chick said...

Uh Oh! I must confess. My bestie just had her baby a few days ago, but during her pregnancy I thought she was the cutest thing and the only weight she gained was in her tummy. She looked BEAUTIFUL and one day I said...awwwwww, can I call you juicy. Never thinking that it was inappropriate. I was only commenting on her cute little tummy. Ooops, I guess I jacked that one up. Going forward I'll keep my mouth shut and smile. One thing I never did (and she hated when other people did it) was caress her belly. Now that's a bit gross. I wouldn't do it before she was pregnant, so why start rubbing on her when she wants it the least.

Ah man, my feet got soooooooooo swollen and nasty that my friends STILL make fun of them a year and a half later. While I agree, I put Shrek to shame, it gets old.

I had people give me 8 loads of crap for having a planned c-section. It wasn't my idea, but they tried to talk me out of it every which way. Sorry my kid never dropped, was 9 lbs, and I'm 5'2". My doc just said that's what we are doing, and I trust him. I really wanted to slap some people with that one. I won't tell you how to give birth if you don't tell me!

Seriously, people start crossing the line when you're pregnant. Why is that? People rubbed my belly (I agree with confessions of a paper craft chick, if you wouldn't do it before, why start now?), people ask all kinds of personal questions. It's crazy!

My husband "Moo-ed" at me about a week before I had Brendan. He will hate me for not describing what he thought was a perfectly good joke.

I was playing on the floor with my dog (why did I think this was a good idea at 38 weeks?) and I couldnt get up. I looked at him for help, and with his alcoholic drink resting on his chest in one hand, he smirked and said "Mooooooooo" He said I reminded him of a cow getting up in the field. I told him to stop talking.

He is really a sweet and loving man. He just calls it like he sees it I guess. And, no matter how hard I tried to get him to laugh during labor, he would NOT. he didnt wanto cross that line, so I'll give him half credit for that.

I was really lucky during my pregnancy and barely showed at all up until like the 7th month and then still wasn't huge (sorry, don't hate me) but I DID get sick of people going "YOU'RE pregnant?!" and staring at me disapprovingly and then saying how I was way too small and going on and on about how lucky I was. Right after they told me I was too small. Aargh!

That is such a wonderful photo at the end of the post. You both look so relaxed and happy.

I think it is always inappropriate to ask a woman if she is pregnant, even if she looks like she's 7 months along. What if you're wrong??!?

I'm nice to pregnant women! But I'll tell you what really irritated me when I was pregnant...
"Just eat a cracker before you get out of bed in the morning, it makes a big difference". Yeah well it didn't. And I ate the stupid cracker EVERY MORNING for 17 WEEKS! I heard this advice over and over and over. Even when I tried to tell the person I already do that, got any other suggestions, they would just ignore me and keep talking about how this helps so much with morning sickness. I told my husband if one more person gives me this advice I'm going to smack 'em! :) Thankfully my "morning" sickness went away during my second trimester.

I got this one from my husbands uncle - "Wow, you're gettin' fat there girl!"

Just this weekend, I was made to feel uncomfortable by a pregnant woman when the conversation went like this. Her husband "Here hun, Christie got you a coke because she just heard about our suprise." Me "Oh, are you having a baby?" Her "No! Are you telling me I'm FAT?" Me: Dumbfounded scared look. Her (now laughing) "Just kidding! Yes, I'm pregnant. And we are so excited." Me: Walking away, still scared. It was seriously the most uncomfortable moment and I didn't even know I was walking into that. I didn't say another word to her the entire party for fear of what else she might yell at me when I just asked a question. I thought it was a safe question, but apparently not.

I walked by this beggar by the train station every single day. One day he yells out "That is going to be a BIIIIGGGG BAAABBBYYY!!" Im pretty sure the whole city heard him.

Actually the worst line was my four-year old son commenting to a sweet young lady that sat in our row on the plane. When is your baby due?

First, I'd like to say that you are definitely awesome with your 34 hour labor, 10lb 4oz baby, and no epidural.

Second, I know I'm a bit behind on the postings, because I'm just *now* getting some personal time, but a few of my "favorite" lines from this pregnancy:

From my mother-in-law, said while rubbing my belly: "Wow, Jennifer's pregnant with twins, but you still look bigger than her...maybe she's too small?" OR lady, you have just said that I've gained more weight than a woman who has TWO babies in her, as opposed to my one.

From the woman who works in the office next door, that I RARELY see, but everytime I do, she makes some dumb ass comment: "Wow that baby still isn't here yet? You look like you're getting bigger every day...I hope your labor isn't hard". What I wanted to reply was, "Wow, you look like you're getting uglier every day, I hope being you isn't too hard". But I kept it together....

When I was in my third trimester with baby #1 one of my best friends came to visit. The first thing out of her mouth was, "Wow, you're huge!" I just nodded and smiled. I was huge and I didn't take my turn to retaliate when she too ended up being "huge" at the end of her pregnancy. I'll never forget the flush of embarrassment that I felt come across my face when she said those words.