I know it sounds cliche, but at this very point, I wish I could just pause time. Max is at such a great age. He's still a baby but he's getting more and more interactive.  As he laughs at his daddy or grabs at a toy, I start to catch glimpses of him as a little boy.  Not a baby, but a little boy.

I'm not ready for that.

So instead, I try to savor every moment.  I cheer at his development but at the same time each new accomplishment is one step closer to him moving away, wining a Super Bowl ring, getting married and making grandbabies.

Ok, kidding, I'm not looking that far ahead.

Remember my pity party where I thought Max was a pain in the ass, fussybutt because of teething?  Nope.  No teeth.  Instead, I think he was going through a development spurt. Within the last week he's started doing all kinds of new things.

The cutest is the "singing".  While he's not making distinct syllables (or winning any Grammy's), he's started babbling to himself. In the car or when he's falling asleep in his crib he "sings", coos and "talks".  It's adorable.  I wish Brett and I could capture it on video but as soon as he realizes someone is paying attention to him, he stops.

While he's a totally champ at rolling from tummy to back he is still working on back to tummy.  As you can see from the picture he's almost there.  He gets soooo close and then decides "Nope. Not today". 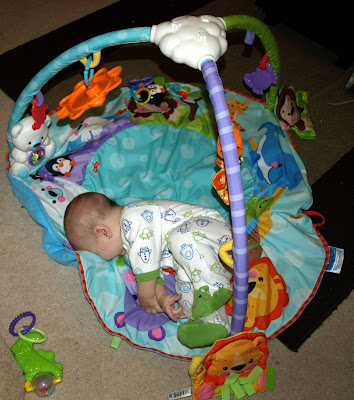 The biggest development is that he can sit up on his own.  Well, not really sit up, but balance on his fat rolls. 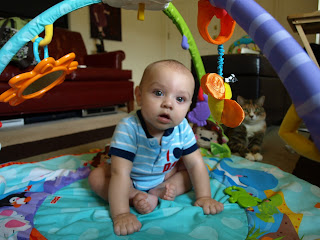 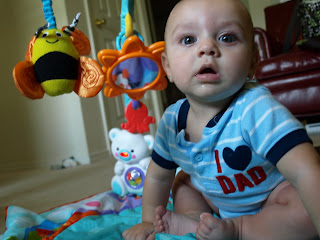 He can't actually get to that position on his own.  Brett and I have to prop him up and then hover over him as a spotter lest he do this: 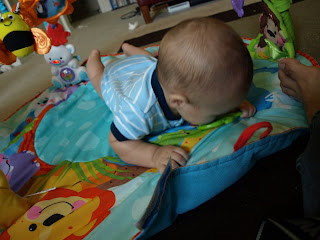 But still, we think it's pretty awesome. Max however is pretty indifferent.  He's just glad he can get a better grip on his bee! 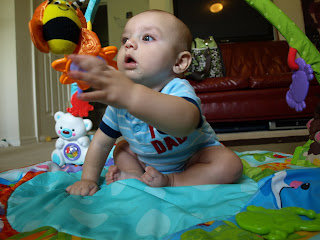 Next thing you know, I'll be watching him at Bears training camp! But for now, I'll just enjoy my baby boy.
Posted by Laura @ The Things I Said I'd Never Do at 10:05 AM

he is such an adorable and amazing little boy!! We need more pics soon!

It's so fun to see them growing and developing! Every stage is fun for you as a mom, yet bittersweet. What a cute guy!

I'm so with ya! It's so hard to watch your "baby" slip away. You know they have to grow up, I just wish it wasn't so fast.

LJ is totally moving into little boy stage. He's climbing on all the furniture, bouncing a ball, and figuring out which shape fits in which hole of his blocks. I swear it was just yesterday we were celebrating him proping up on his fat rolls too! Enjoy every moment you can!

So cute! My little man has that same bee with the orange wings and he loves it!

very sweet.. my nephew has that play center and absolutely loves it. Enjoy every moment!

What a sweetie pie. Love his chubby little legs.

Babyhood does go fast, but I think it's wonderful that you are reminding yourself to enjoy it!

I love that top photo. If you didn't know the context of him trying to roll over, it just looks like he's flopped down. Like he's pitching a fit and over-exaggerating a fainting spell to get attention. Guess you're lucky he's not a girl and the odds of that happening for real sometime are greatly lessened. :)

With baby #2 I learned not to wish my baby was at another age, but rather to enjoy each one for it's own uniqueness. I had to accept that each has it highs and it lows and neither lasts forever. That appreciation is what keeps you from giving up during the low points and also lets you savor the moment during the high points.

Max looks so content and so alert! I want to squeeze him!