Poor Max has a cold. Again. Actually it's not just a cold.  It's some rare condition where he generates more snot then your average adult.  Seriously, the poor child is covered is boogers.   Combined with the liters of drool spewing from his mouth, it's pretty disgusting. Adorable, but disgusting.  See? 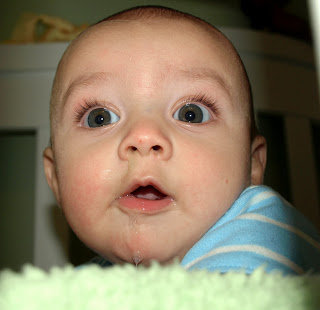 It's not like this is anything new.  Since he was 4 weeks old, he started this perpetual cold that varies in seriousness.  Usually, he has a few sniffles,  or sounds congested but what he has now is way worse. At night he's so stuffy he can't suck his thumb and breathe at the same time.  Therefore he keeps waking himself up. Brett and I are essentially walking zombies because it takes so long to calm the poor kid down and get him back to sleep.  Then, an hour later, we're at it again.

It's so bad we've had to break out the nasal aspirator to help clear his nose. I hate using it but Max hates it even more. He thrashes like crazy and it requires multiple people to hold him still.  When the actual snot sucking takes place it scares the hell out of him.  He lets out the most heartbreaking, blood curdling, "Oh my fucking god please stop killing me" scream. I know it doesn't hurt him; that's a completely different cry.  But he hates it so much and it breaks my heart to have to do it.

Hubs and I have tried multiple techniques to make the process less scary for Max. Big smiles as we approach. Using the battery powered "bwain sucker" that plays music. Singing to him. Cuddling him both before and after we try to remove snot. None of it works. And his cries are so pathetically heartbreaking, last night I was in tears too.

This hatred of the snot sucker is new.  He used to smile when we used the battery powered one and he loved the music.  Not so much any more. Now he hates any and all snot removal techniques, from whipping his nose with the tissue to the bulb syringe. We try to keep the "sucking" to an absolutely minimum but it has to be done.  Even saline drops (which he also hates with a violent passion) aren't helpful.

So until this round of "Snot Fest-Summer2010" ends we'll keep sucking snot, rubbing in the Vicks, sitting him in the bathroom while we shower and endlessly running the humidifier (despite the fact its 98% humidity outside). Even when dressed adorably, the poor kid just looks miserable. 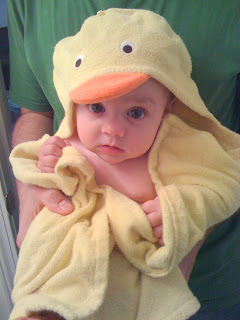 Adorable, but miserable.
Posted by Laura @ The Things I Said I'd Never Do at 7:18 PM