Minature Salesman? I Don't Think So

When I was in Brownies I hated those freaking Girl Scout Cookies.  Ok, so I loved the cookies but hated that I needed to sell them in order to get a badge.  Every spring I put on my brown jumper and my Troop 183 sash and marched out into my neighborhood with an order form in hand.

As I rang the doorbell of the first house I would mutter a small prayer.

My parents weren’t big fans of the process either because my Dad would NEVER take an order form to work.  Other girls in my troop had it soooooo easy.  Their parent would bring a form in and the next thing I knew they sold 150 boxes.  They got the easy way out and damn was I jealous.

Now, as an adult, I completely respect my Dad’s view on the matter.  At least weekly I am approached to buy cookie dough, ridiculously overpriced wrapping paper, religious magazines or a 10 lbs Christmas ham for someone’s kid.  I just don’t have the money to buy all that crap and I am starting to become immune to the evil looks shot my direction when I politely decline the opportunity to buy a ridiculous snowman statue most likely covered in lead paint.

I thought I would have several years before my kid was in an organization that was raising money by selling crap.

When I picked him up from day care on Thursday among his empty bottles and daily activity sheet was a catalogue and a letter asking parents to hawk this shit for the school.

I almost stomped into the directors office screaming. “ARE YOU FREAKING KIDDING ME!  HE’S SIX MONTHS OLD!!!”  However, the day care is crazy close to work and I love the teachers so I didn’t want to risk getting kicked out.  Instead I scanned the letter, saw it wasn’t mandatory and promptly dumped the catalogue in the recycling bin.

We’ve got years of this ahead of us.  I’m not going to start before the kid can even talk. Although, I am sure if he came up to people looking like this: 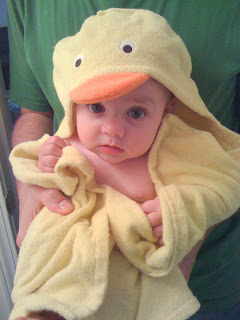 We could make an absolutely killing.

However, out of principle I refuse to use my cute son to sell stuff.  Instead, I’ll save this face to convince friends and family to babysit. .