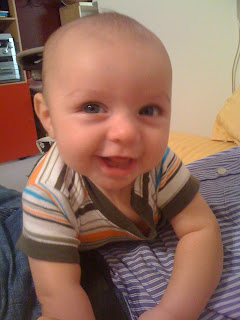 Ok friends and family, I hear you.  You aren't coming out and saying it, but I can hear your thoughts. "Laura, that's great you and Brett starting eating steak on Sunday and you make cake in the microwave.  Sure, you love a couple of Dad's and you took a picture of a train. Good for you.  But we aren't reading this blog for you.  We want to know about Max!"  Fine.  I'll stop talking about myself for a minute.

You really want to know about Max?

Actually, besides the issues mentioned above, Max is developing right on track.  At least I think so.  I stopped comparing him to what the "experts" say he should be doing because it makes me a bit insane. He's a week ahead in some places and a week behind in others. The past few weeks have had some pretty major milestones however.

The biggest development is that Max has started using his hands. He skipped the "batting at things" stage altogether.  He's grabbing at things and it's obviously intentional because when he gets a grip, the object goes directly to his mouth.  It was fun the first few days as he would swing and miss but now he's pretty accurate.  The only downside is I need to temporarily put away all my dangling earrings! 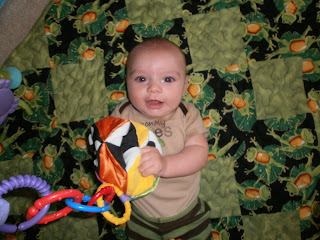 Another ADORABLE development is he is more verbal.  From yelps to coos to gurgles and the best- laughing, he is able to communicate more than "HOLY CRAP I'M PISSED SO FIX IT". It's totally awesome. Plus, he does this the most when we are changing his diaper, thus making a unfun task completley awesome!

I no longer dread car rides now that Max doesn't scream bloody murder the whole time. Instead, he looks around, maybe yelps once or twice and falls alseep.  It's adorable. And blissfully quiet. 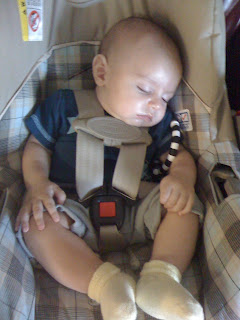 Other things changing include:
-He notices himself in the mirror...and thinks he's hysterical
-He's working on sitting up and no longer despises his bumbo.
-He's able to play in his exersauser though he isn't 100% sure he likes it.
-He has rolled from tummy to back 7 times but most of the time does it when no one is looking.
-He still loves that damn bear 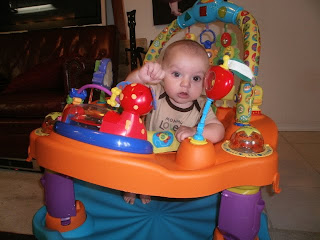 The only thing that isn't going well is the lack of sleep at night.  He's an adorable angel during the day but at night he's screaming  every 2 hours.  We've tried EVERYTHING but he doesn't want to sleep.  It's one thing after another.  When we finally figured out a good feeding schedule, he decided he doesn't want the swaddle all night long.  When he finally broke the swaddle habit, the constipation thing happened.  Once his tummy troubles were under control he got a cold.  So, we keep trying things to get him to sleep for more than a few hours at a time.  We all keep begging praying that one night a switch will flip and he'll sleep for a long stretch, every night. Unfortunately, my gut is telling me we have another 9 months of this.  Brett and I no longer find coffee effective.  Instead, we just ingest caffeine into our veins.

I don't want to complain too much. He's healthy and that is all that matters. All in all, he's a pretty wonderful kid and my life is better with him in it.
Posted by Laura @ The Things I Said I'd Never Do at 11:57 AM

Love it! Well all of it but the sickness and not sleeping. Miss you!

ahhhhh he is so big!! I miss him so much!

YAY! FINALLY! A picture of a child CORRECTLY positioned/strapped into a car seat! Usually about 99% of the pictures that I see there is something blatently WRONG! I can't help it, I notice these things and it drives me crazy! I guess I can actually take some credit for this one being right, though:)

Love it! I have been told there is a light at the end of the tunnel with the sleep thing... we have yet to find it :P

I love that striped onezie with the brown and orange so much. Such a cute'ums!

such a happy looking guy! now, just tell him nicely to start sleeping through the night so you can let go of the caffeine iv drip :-)

We did learn from the best, Alison!!

AWW! He's really cute! I miss those days, as mine are 6 and 7. Posts like this will end up meaning so much, because it really does all blur together. I wish I'd been more detailed!

Thanks for following Single Mom in the South!