It's Barely Fall and I'm Already Pissed at Winter

(Before I get to my original post, you'll notice the look of my blog has changed.  It's rather....plain.  Years ago I gave a designer a decent amount of money to make customize my blog design. While it looked decent, she messed up some major template things. For awhile, I could let it slide, but I've finally reached my limit.  After countless days of banging my head against the desk researching code to fix it, I've finally decided to blow it all up and start from scratch.

So this is what you get for awhile.

I'm in the market for a new blog designer. Not just someone that can do graphic design but actually get into my page and do all the magic coding put it into blogger. I'll pay more if they can orchestrate a switch and move everything over to Wordpress. Email me at saididneverdo@gmail.com )


Personally, I declared the season of Autumn to start onSeptember 1.  That’s when the Pumpkin Spice Lattes come out and we all know Starbucks has sway more than some fancy-pants scientist with multiple degrees.

Speaking of Starbucks, I’m to going to make a highly controversial statement:

The Salted Caramel Mocha is significantly better than the Pumpkin Spice Latte.

That’s right, I have the balls to say it. Just try it for yourself.  You’ll see you’ve been misguided for years.

Ok, I got off topic. Sorry.

Anyway, though I declared Autumn begins on September 1, technically it began on September 22.  To celebrate, we did the most Fall-like thing I can think of- attend a Fall Festival.

My mother-in-law, Renee, was in town while my husband and father-in-law went off to do some go-kart racing thingy.  After a big breakfast, we packed up Max and headed 45 min north of Cincinnati to the Hidden Valley Fruit Farm in Lebanon Ohio. Their “Apple Daze” festival was in full swing and it was perfect introduction to Fall for my southern-born preschooler. (Fall is just a state of mind in Coastal Georgia.  It doesn’t get cold til December)


Apple picking!  Bouncy Houses!  Pumpkins!  Hay Rides!  Apple Cider! Apple Fritters!  Caramel Apples!  Sweaters!  Boots! We basically knocked out our Autumn Bucket-list in a 5 hour period. All I have left to do is go for a drive when the leaves change and eat some sort of butternut squash soup. Then, I can happily greet winter.  And by happily greet, I mean shake my fist at it while angrily grumbling that I never had to scrape ice off my car in Savannah. Why the hell did we rent a house with a one car garage anyway? 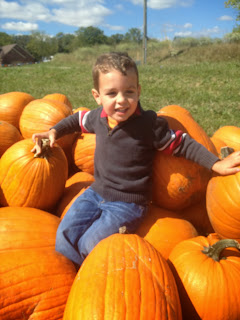 September 1st is always the marker in my head too! Though I suppose it does take a few more days for our weather to catch up.

My favorite part of where I live is that there's practically no fall. I hate fall. I LOVE the Salted Caramel Mocha, though. That thing is the best.