I thought long and hard about this challenge and I came up with lots of things.

Perhaps a picture of Max spouting a Chicago Bears onesie.  It would show how team allegiances for a very American sport can form before one is even of the ability to make up his or her own mind.

I considered going downtown and capturing the homeless guys who beg for change in front of high end stores and restored historic homes.  It would highlight the very real unequal distribution of wealth in this country.

I thought about framing shot of the two cars that seem to always wind up next to each other in the parking garage.  One with multiple bumper stickers and window decals proclaiming their belief in Christianity.  The other with stickers highlighting their dis-belief in any higher power.  This would represent both the freedom of expression and the freedom to practice any religion, two tenants the country was founded on and that its citizens still hold close.

In the end,  I didn't have to seek out any shot. Instead, my picture this week presented itself when I walked out of my local Kroger (without a real camera) over the weekend. It's of something we can all agree is truly American: 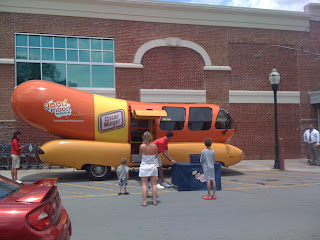 I don't even eat hot dogs and I LOVE the Weinermobile!

Good Morning Miss Laura. I'm trying to figure out how to join this You Capture thing.... :-/

I love the little boy that's standing there looking at the huge hot dog! I wonder what he must be thinking! :)

@AlisonLOL. It would be a man that would figure out that distinction. Did he give you examples of ones that ARE good for grilling? Because I hate mine boiled, so I should apparently be buying a different brand! :)

yay for my employer!

Love it! That thing always shows up at the most random times/places!

@Jenna
Hebrew National, Johnsonville, and Ballpark. I thought everybody knew that!

We once chased the WeinerMobile all over town trying to get a decent picture and totally failed. You got lucky and caught it off guard! LOL

I've never seen a weinerMobile. That's hilarious! I don't think they've made it to Wyoming yet! haha!

"Oh I wish I was an Oscar Meyer weiner". However I prefer Ballpark bun size franks.

Oh, that is so AWESOME!

Haha, classic! I saw the Weinermobile once as a kid. It seemed so big and cool! Guess it still does...

Great post! I have never seen a weinermobile and now I feel like i ma missing out! Love your blog and I am a new follower! If you get a chance come and enter my giveaway- it ends tomorrow and I think you would like it. Its a necklace from Devon Baer New York Designs! Just click on the link below: http://kitchenbelleicious.blogspot.com/2010/06/i-have-to-have-this.html

My bologna has a first name....